This article appeared in Unlocking a world of potential, a publication by British Council.

Even in a world where most children are still learning basic skills, critical thinking and problem solving can and should be taught.

In a low-income community in South Delhi, India, students are reading Harry Potter and the Philosopher’s Stone. Today’s discussion is about the Potions Master. The teacher encourages students to think independently. ‘I don’t want solutions which the author gave you. I want you to be thinking, to be imagining of a better solution.’ What happens next? It is visible that students are thinking hard; they are trying to come up with different answers. Deeper learning is happening. You can see an inspiring video of this classroom here.

Learning to think critically and solve problems is not easy, but classrooms like this one suggest that all children are capable of it. However, the reality in most schools around the world is quite different. Even if children were capable of critical thinking and problem solving, they are currently not mastering these skills. Only four out of ten primary school students reach a basic level of competence in numeracy, literacy and science. Given this reality, what is the role of critical thinking and problem solving? Can these skills be taught at all?

Percentage of children who reach a basic learning level in reading, writing and arithmetic. Each country is represented by a circle sized in proportion to its population. Click here to see the interactive infographic or here to read The Learning Challenge report.

The meaning of critical thinking and problem solving

Cognitive scientists suggest there are three types of thinking: reasoning, making judgments and decisions, and problem solving. Critical thinking is a specific way of thinking. This means that reasoning may be uncritical or critical, and the same applies for the other two types of thinking. It is critical if it has three features:

Effective – critical thinking avoids common mistakes such as only seeing one side of an issue, discounting new evidence when it conflicts with your previously held views, reasoning from passion rather than logic, and failing to support statements with evidence.

Novel – critical thinking involves thinking in new ways, not just remembering solutions or situations that are similar enough to guide you.

Self-directed – critical thinking involves thinking independently, in a way that is not overly controlled by anyone else, such as a teacher.

When young people choose what to study, they can think critically by considering multiple perspectives: the opinion of family members, possible job openings, wages and graduation placement rates. A recent international survey suggests that fewer than half of young people have the necessary knowledge about all of these different perspectives.

Effective thinking also involves an open mind: being open to new evidence even if it is in conflict with one’s previously held views. For example, some people think that HIV spreads by sharing baths, towels or cutlery, or using the same toilets or swimming pools. In fact, none of this is true. But discrimination continues in many communities, even if people’s views are based on misinformation and prejudices. How will people react when they are presented with evidence on how HIV really spreads? It is not easy to change one’s mind, especially if the issue is very emotional. That’s why the attitude of having an open mind and being open to new evidence needs to be practised at school, so that it becomes a habit.

Critical thinking and problem solving may sound like terms that a young philosophy student would talk about at university, but actually these are important skills for everyone.

One of the main reasons is an economic one: it is about jobs and livelihoods. Critical thinking enables people to make better decisions and improve their livelihood. This is vital for everyone. For example, 75 per cent of the world’s poor live in rural areas and are farmers. Being able to think critically about different approaches to water and grassland management may boost productivity and increase income. In some communities, adopting different breeds has grown milk yields by 65 per cent, and better grassland management has doubled the income of herders.

The economic argument has far-reaching implications. Because of technological change and productivity growth, the nature of work is changing in agriculture and many other industries. A growing proportion of jobs now require teams of people working together to solve unique problems, as opposed to routine problems. However, relatively few students learn these skills at school. In most countries, fewer than one in ten (15-year-old) students are able to solve fairly complex problems creatively, according to the PISA tests in 2012. 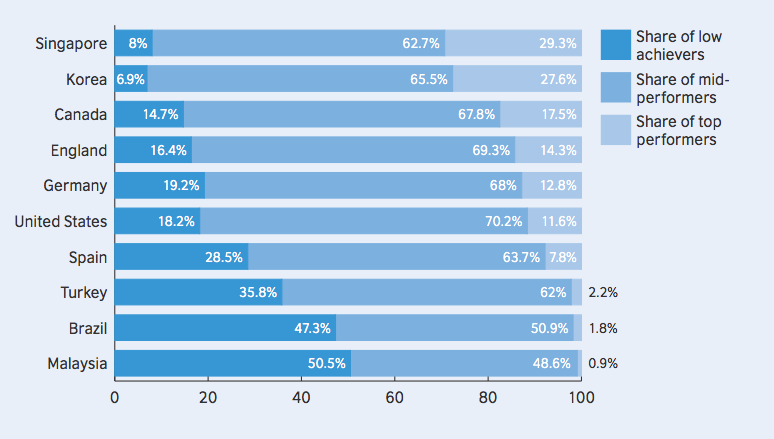 According to management consultants McKinsey & Co, 75 million young people around the world are unemployed and a shortfall of 85 million high and middle-skilled workers is expected by 2020. In a recent international survey, four out of ten employers said a skills shortage is a leading reason for entry-level vacancies. Alongside general work ethic and teamwork skills, problem solving is among the skills that are highly valued among employers – but where the competence of new hirees does not meet expectations.

Can it be taught?

This brings us to the question: if critical thinking and problem solving are important, can these skills be taught?

Therefore, a more promising approach involves integrating critical thinking in to subjects. Critical thinking strategies – such as looking at an issue from multiple perspectives – need to be made explicit by the teacher, and practised extensively by students.

All of the above can only be achieved if we invest in high quality professional learning programmes for teachers. How to model critical thinking, how to ask open questions, and how to provide feedback that enables students to solve non-routine problems. Teachers need new skills and better tools to meet these expectations. Curriculum resources have to be redesigned with critical thinking and problem solving in mind. And finally, the focus of exams needs to shift to evaluate these skills as well.

If students learn how to think critically and solve problems, it would make a big difference to their livelihood and happiness. This is not a question of luxury.

I am a Principal Consultant at the British Council, working with teachers, school leaders and policy makers to improve the quality of teaching and learning. I live in the Netherlands with my wife and son.